Have you ever signed up for a race and then forgotten to add it to your calendar?

Because I have. And I don't recommend it.

I ran the Hot Chocolate 5k on November 4. I didn't intend to run the race, but I signed up for it at some point and proceeded to forget about it until I started receiving emails about packet pick up. So hooray for reminder emails! But boo to forgetting about registering for the race!

On Friday, November 2, I made my way down to McCormick Place to pick up my race packet. Thankfully, I was working downtown that day, so it was fairly easy to get to packet pick up in the morning and still get to work on time. I've heard so many horror stories about the Hot Chocolate race expos and packet pick up lines, but I have never experienced that. I was there nice and early, arriving only about 10 minutes after the expo opened. There were no lines when I arrived, so the packet pick up process was incredibly quick and easy - first you get your bib number, then you head to the packet pick up area, then you have a chance to try on your swag and exchange sizes (subject to availability). My jacket surprisingly fit perfectly, so I skipped the exchange area and made a quick sweep of the expo. I even had enough time to swing by the chocolate booth for some hot chocolate and goodies before I needed to catch a bus and head to work.

If you are ever at one of the Hot Chocolate race expos and aren't sure where the chocolate goodies are, then just look for this guy: 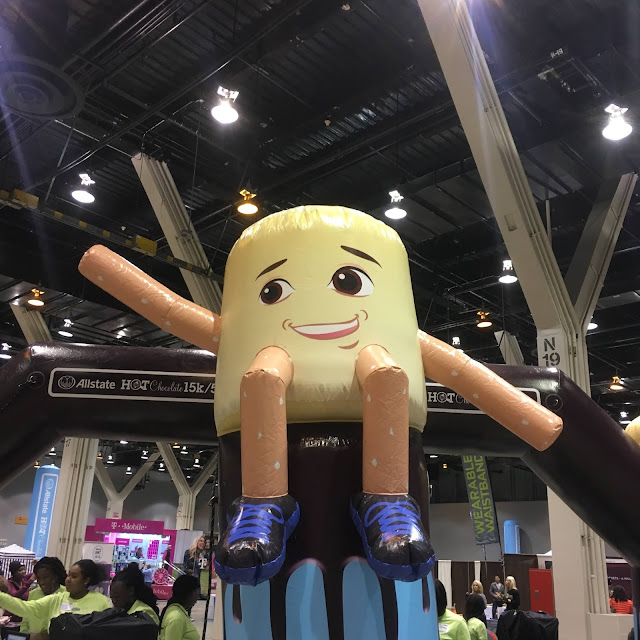 The night before the race, I made sure that I had everything I needed laid out and ready to go for the morning. The forecast called for wind and rain, so I made sure that my race clothes were appropriate, including a light weight jacket that would provide some shield from the rain without being too heavy.

I was going to have to head straight to work after the race (forgetting about the race meant I hadn't requested the day off), so I had a much heavier gear check bag than usual because I had to take everything that I would need for work with me to the race. I don't really like to have anything valuable in my gear check bag, but I had no choice this time due to my poor planning.

The morning of the race saw me waking up before the sun. Hannah, my cat, was not impressed and decided to sleep in. I'll admit that I was a little jealous. 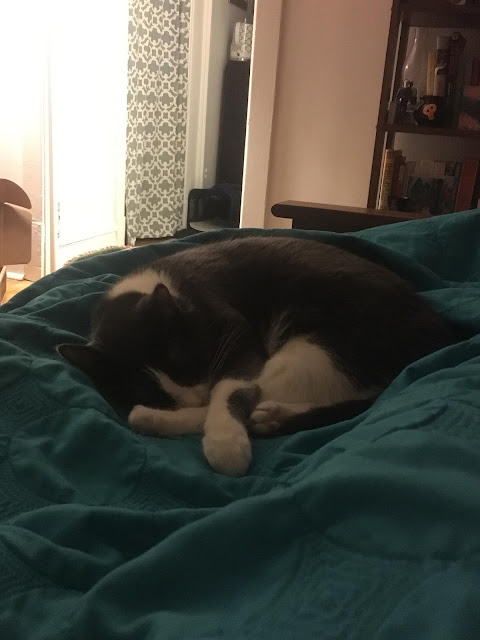 As my train made its way downtown, I watched as more and more runners got on at every stop. I was feeling surprisingly calm, which was a nice change of pace. I soon discovered, however, that I had given myself too much time to get to the race and ended up arriving far too early. Despite being in wave 2, I was there before wave 1 had even closed their corrals, let alone started. I decided to make the best of it, checked my bag with the 5k gear check, made a quick pit stop at the port-o-potties (which were plentiful), and then went to watch the start of the race.

Once everything was underway I started the long walk back to my own corral. 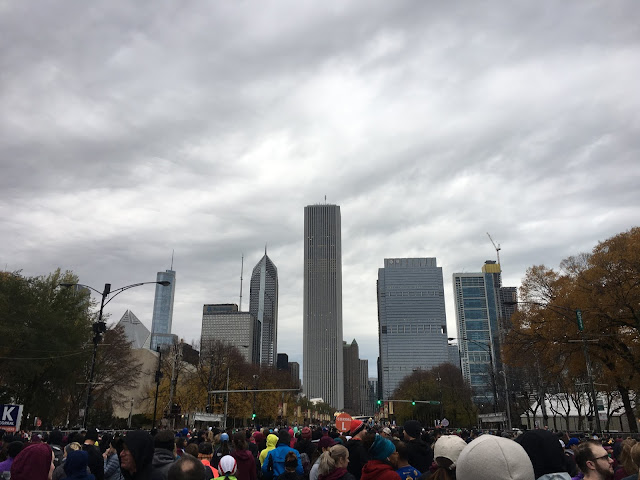 The worst part of every race is the waiting - waiting for gear check, waiting in line for the bathroom, waiting around in the corral for the race to start. I hadn't run a race alone in almost a year, and I was not fully prepared for the loneliness I felt in the corral, despite being surrounded by other runners. And I do mean surrounded. This race may have officially grown too large for me to handle. There were sooooooo many people.

I was starting to feel anxious, and I just wanted to get started so that I could finish and go to work. I was feeling like this whole thing was a mistake and I should have stayed in bed, snuggling with my cat. Soon wave 2 was getting ready to start. We began inching forward, getting closer to the start line, and I realized that I was here, so I might as well do this thing.

My corral was finally at the start line, and I began my run.

The 5k course was the same as last year, with the first mile being on the lower roads beneath the loop, Lower Wacker specifically. Not the prettiest course, and I heard quite a bit of grumbling from those around me who had never run the race before, but it did keep us out of the wind. I felt pretty good for the first mile, but shortly after the mile marker, I felt the tell tale tingling in my foot that meant it was about to go numb (something that has continued to happen during almost all of my runs for the past year). The remainder of the race was peppered with regular bouts of walking, as I tried to stop my foot from going numb. Good times! We had finally emerged above ground again, which was good because Lower Wacker was starting to freak me out a little - it is just so dark and warm and claustrophobic feeling.

Before I knew it, we had passed the one aide station on the 5k course. I was moving super slowly, had resorted to run/walk intervals, but I was moving and wasn't feeling as anxious anymore. Though it was windy, the temperature was great for a run, and the rain seemed as though it was going to hold off until later.

I did get a few negative comments from other runners every time I would walk, which was entirely unnecessary. Fellow runners, if someone slows to a walk during a race, you don't need to put them down, especially when they are doing their due diligence of moving to the side and checking behind them before slowing down.

As the 5k and 15k courses split, the 5k turned onto Roosevelt to head towards the finish line. It was fun seeing the marathon's blue line painted on the road. As usual for races downtown, I wanted to make sure that I ran all the way up Roosevelt, which I'm happy to report I did. 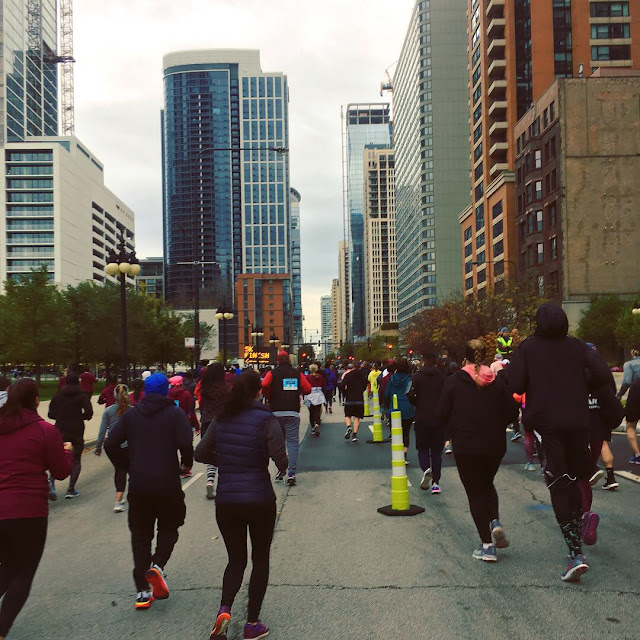 The finish line was in sight! Once I was across the finish line, I instinctively reached to stop my watch, forgetting that I had chosen not to wear it. There were tables filled with tiny cups of water and Nuun just after the finish line, but if you kept moving through the finishers' chute, you eventually reached full bottles of water.

Once I was finished, I made a bee line for gear check, grabbed my bag, and headed to the post race party area to get my finisher's mug full of goodies. Yes, I needed to get to work, but I wasn't going to forsake the sweet snacks that were waiting for me. I couldn't spend any time at the party, but with my tray of deliciousness in hand, I headed for the train to go to work. 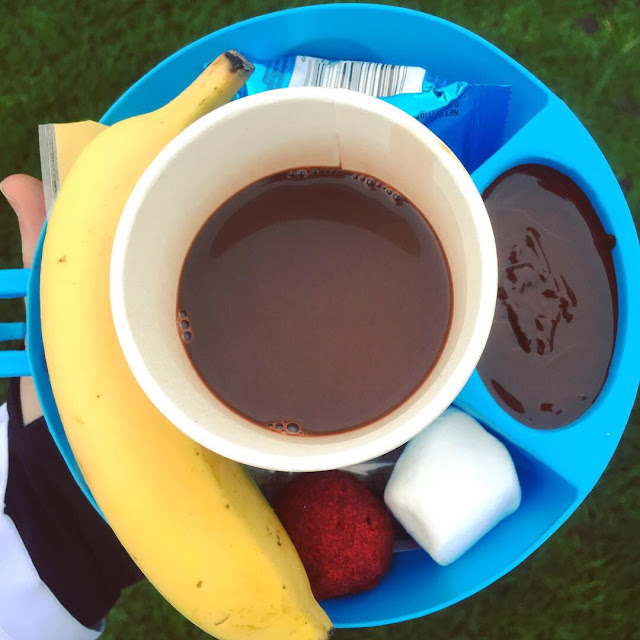 All in all, I was pleased with my effort and happy I ran the race. Sure I wish I was faster and could run continuously without walking, but I am really trying to make a concerted effort to stop dwelling in the past and accept my current ability for what it is.

My finish time of 39:20 is more than 10 minutes away from the finish times I used to be capable of, but that gives me something to continue working towards. My goal this winter is to get back to continuous running. I have another race coming up next week, so we'll see what happens.
Posted by Rebecca at 4:57 PM No comments: