For the first time this year, my anxiety did not win.

I ran the Ravenswood Run 5k on Sunday, and I didn't do nearly as badly as I expected. This used to be my favorite 5k, but I missed it last year due to a scheduling conflict. I'm glad that I was able to return this year, as I really needed the confidence boost that starting and finishing a race finally gave me.

I picked up my race packet (bib number, shirt, and gear check bag) on Friday at Fleet Feet Chicago's Lincoln Square store. It was incredibly quick and painless, and I was in and out in about 5 minutes.  I was a little less than excited about the thought of the race. I was worried about a repeat of this year's Shamrock Shuffle, panic attack included. I was worried about how long it would take me to finish. I was worried that I had been assigned to corral A, and I don't belong in corral A. 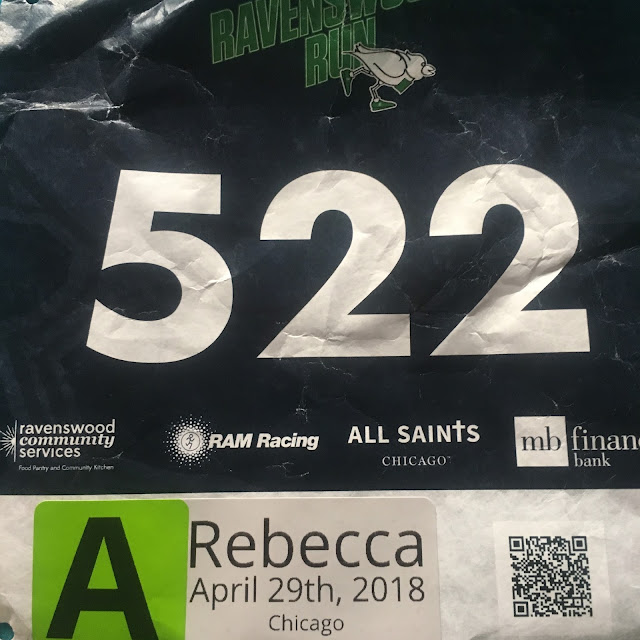 FYI, I found out after the fact that RAM Racing, who now owns and manages the Ravenswood Run, offers "preferred start corral" placement based on previous finish times at previous RAM Racing events (or runners can also submit their finish times from non RAM Racing events), so that is how I ended up in corral A. Surprisingly, you only need to average 11:30 per mile to qualify for this, and they automatically assign you to a "preferred start corral" (basically a corral towards the front or in the first wave, depending on how many corrals and/or waves there are for the race) if you have qualified via one of their previous races. Because Ravenswood Run is a smaller race, with only one wave and three corrals, it felt as though everyone who qualified for this was placed in corral A, as I was not the only slow runner with a big A on my bib number.

I barely got any sleep on Saturday night, as I kept tossing and turning and couldn't convince my brain to be quiet. I ended up getting out of bed much earlier than needed (5:30am) for a race that I can walk to. If I wasn't going to get any sleep, then I might as well get up and start my day. I washed the dirty dishes in my sink, fed my cat, fed myself, took a quick shower...basically I was trying to distract myself from the idea of the race.

Shortly before leaving my apartment, I checked the weather report and saw it was chillier than originally expected, so I switched from capris to tights and added a light weight long sleeved shirt to my planned race outfit. This is a decision that I would later regret.

The race started at 8am, so I left my apartment at 7am and started the walk to the race site. I figured I would arrive between 7:20am and 7:30am, which would give me just enough time for one final bathroom stop and then a quick stop at gear check before I would need to get into my corral.

The lines for the port-a-potties were blissfully short, which made up for the fact that the line for gear check was insanely long. Once I had made it through the line and handed over my bag, I headed to my corral and managed to find standing room at the very back of the corral, being careful to stay to the side so that it would be a little easier for faster runners behind me to pass. 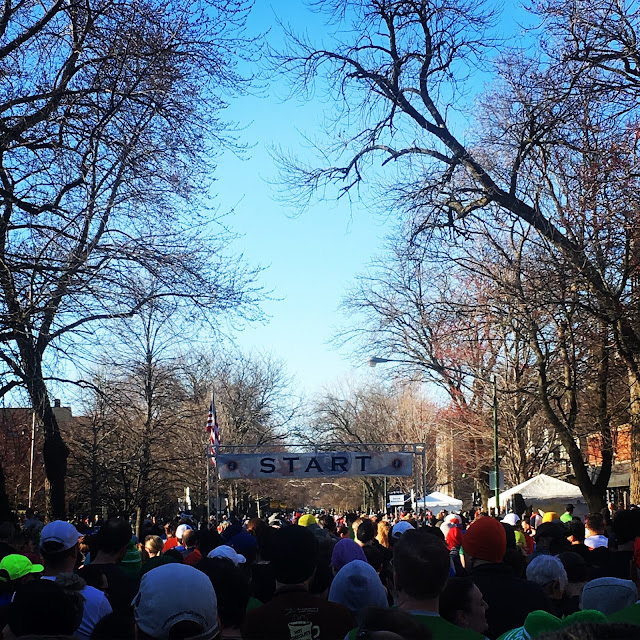 I felt oddly calm standing in the corral. It seemed that all of my panic disappeared once I was at the race site. They did the usual announcements, followed by the national anthem, and then, before I really knew what was happening, we were off. The race had begun!

I was doing it! I was running a race again!

I quickly found a pace that I felt I could maintain and started trying to enjoy myself. There were thanks given to volunteers and high fives given to children. I was feeling good when I hit the one mile mark. In fact, I was enjoying myself a lot more than I have in a long time on a run. I still had the nagging calf pain that seems to have become my constant companion, but it wasn't as bad as usual.

Then, right around the half way point, I got hit by the sound of my own wheezing, which is usually my first indication that asthma attack is looming. I slowed to walk and spent the next couple of minutes getting my breathing under control. Once I started running again, I made sure to occasionally do a full check in with myself - was my breathing controlled? was my calf pain still manageable? head up, shoulders back. just keeping going.

Mile 2 was over, which meant that I was in the home stretch. Just a hair over a mile to go. I was shocked by how good I felt. I just wished that I had gone with my original planned outfit, as I was very very warm. I unzipped my quarter zip and pushed my sleeves up as much as I could. I cursed myself for over dressing.

Finally, the finish line was in sight. I tried to speed up a little, and before I knew it, the the race was done. I was so happy to have finished! I felt great! The gear check line was just as long as it had been to drop things off, so there was some standing around and waiting, but that gave me time to drink some water, because I was incredibly thirsty. Once I had my bag, I was starting to get chilly again, so I threw on my sweatshirt and went to hand out by the finish line to cheer on others until I had to head home to get ready for work. 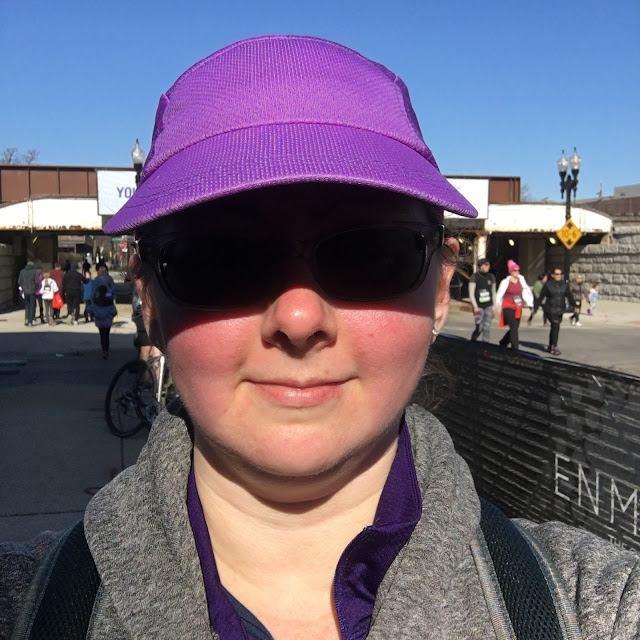 It was a good day.

My finish time was 34:59, which, let's be honest, is not even close to my best 5k time, but I'm still very happy with it. Just getting to the starting line can and has been a challenge, but I think I'm finally heading in the right direction.

I still have a lot of work to do, but maybe next year I can return to the Ravenswood Run and finish faster and stronger.
Posted by Rebecca at 8:18 PM