I luckily didn't have to be at work until noon yesterday, so I had plenty of time to visit the Shamrock Shuffle expo to pick up my packet.

The expo was once again held down at McCormick Place, so it took some time to get there, but I had planned my time perfectly and made it to McCormick Place right at 10am, when the expo began. I had not planned everything perfectly, however, as I made the mistake of not checking which part of McCormick place the expo was in, and I went to the wrong building and wandered aimlessly for a bit before finally asking someone where to go.

As I made my way there, I started to notice more and more people in running shoes who were all walking with purpose in the same direction, so I joined the herd. Soon, I was there. 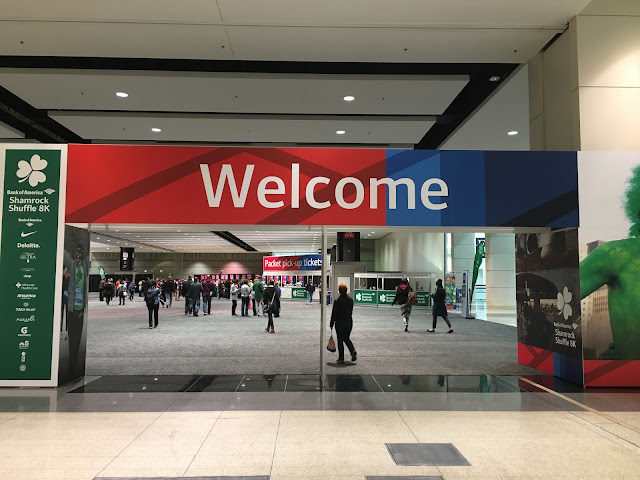 I had already worked out my game plan during the train and bus ride to the expo.

First stop was packet pick up. I had my email packet pick up ticket printed and ready to go, so knew my bib number and got in the appropriate line. They had places where you could look it up if you didn't know your number. The lines were moving quickly thanks to friendly and efficient volunteers, and I had my bib number in hand in a matter of minutes. 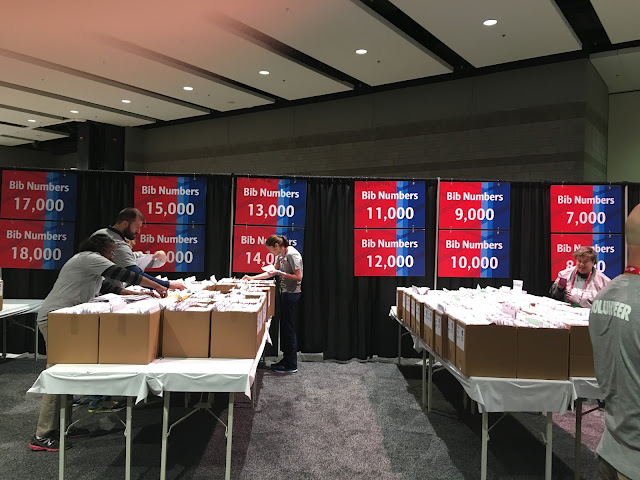 Next stop was shirt/gear check bag pick up, which was on the other side of the expo hall. I made a bee line there, ignoring the various booths on either side of me, and once again only had to wait a minute or two before I had my items. 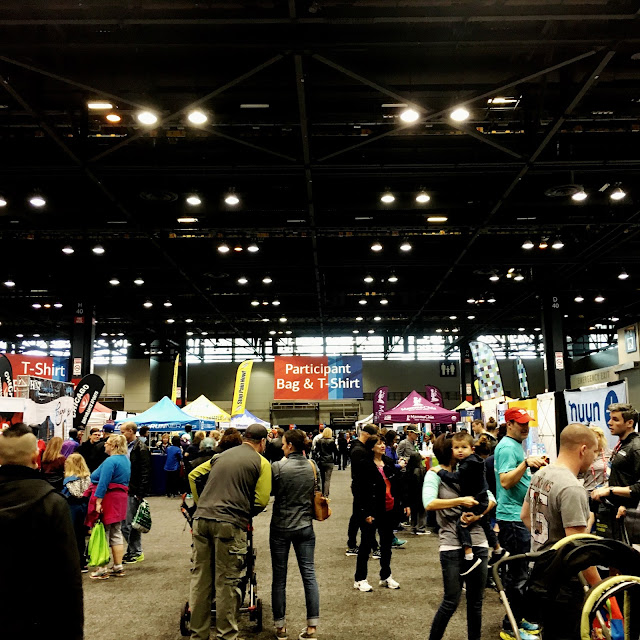 One of the things I always like to see at a race expo is a shirt exchange. It is great being able to try on my shirt and exchange it for a different size, if necessary. Some shirts run big while others run small, so it is sometimes hard to judge what size is needed, especially if the brand isn't announced in advance or is a brand that someone is unfamiliar with. That is not a problem with Shamrock Shuffle, because the race shirts are Nike, and I know what size I need. My shirt was the perfect size, so I didn't need the exchange table's help. 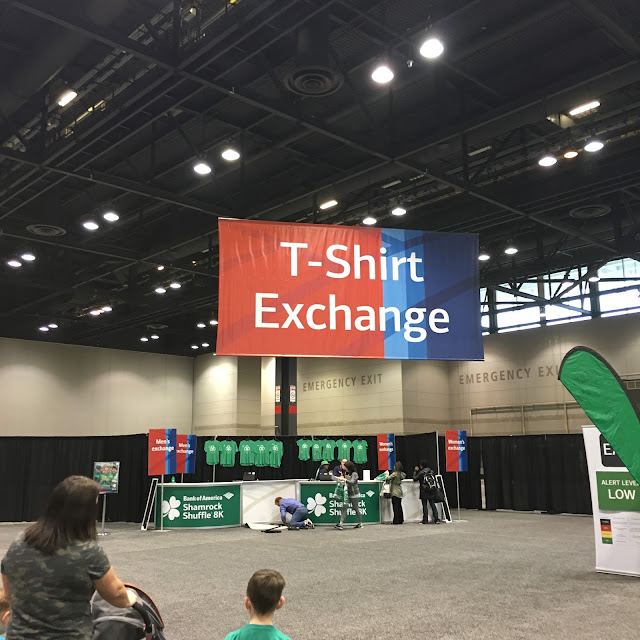 Next up, the actual expo! I made my way through the expo hall and checked out all the different booths and vendors. I'm a sucker for free stuff and raffles, so I talked to a lot of people and walked away with a lot of random stuff.

The most random item? This box of rice. 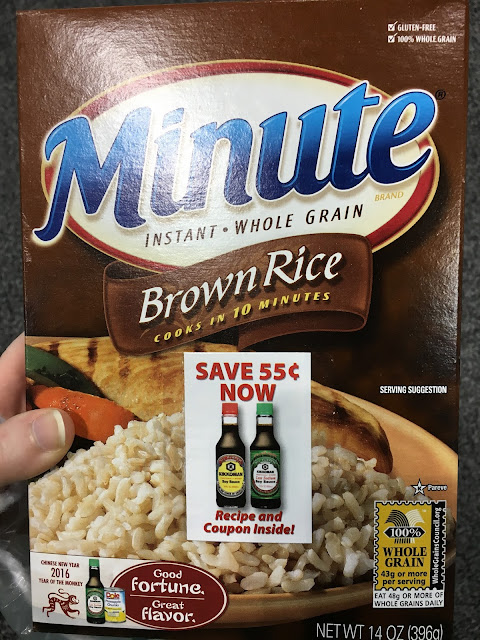 There were also tons of races offering discounts if you signed up at the expo. Yeah...I signed up for a race...that I wasn't planning on running this year...sigh. I just can't say no to a discount when I know that I'm available.

There were a bunch of races that I almost signed up for, but I realized that I didn't want to sign up for a race that I was on the fence about. I'd rather pay a little more and know without a doubt that the race was 1.) one that I was excited to run and 2.) one that I'm available to run. 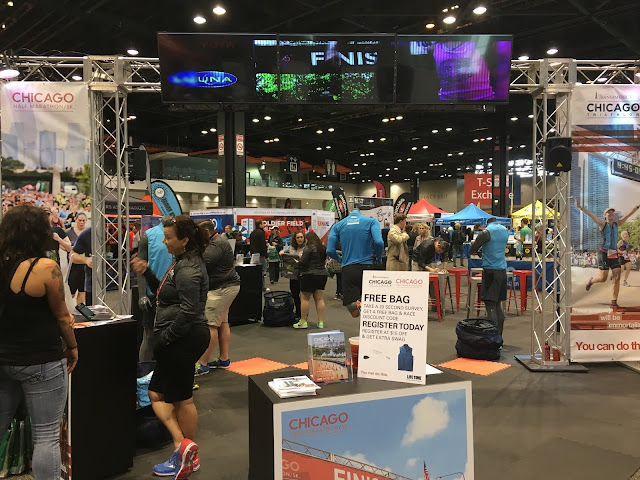 A lot of charity teams also had booths set up and were handing out information for those interested in running the marathon for a charity. I stopped by a few of the team booths to get info. I've started thinking about taking on the challenge of a marathon. I just don't know if I'm ready to pull the trigger.

Soon, I needed to leave to get to work on time. I left with a bunch of random things: 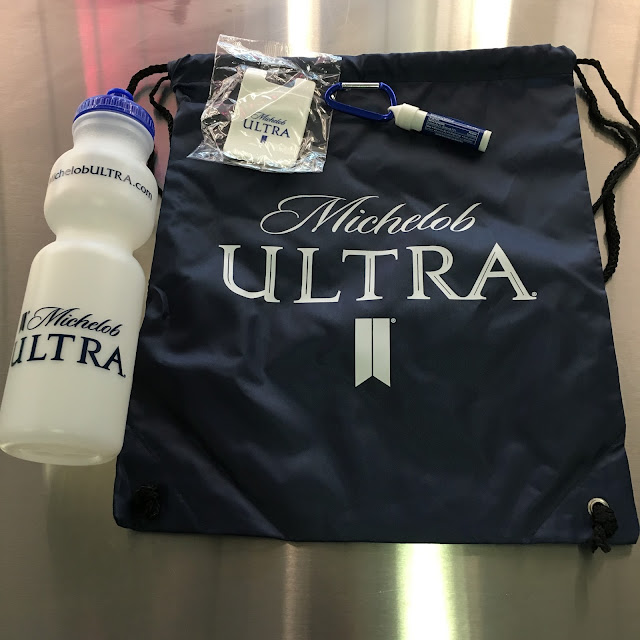 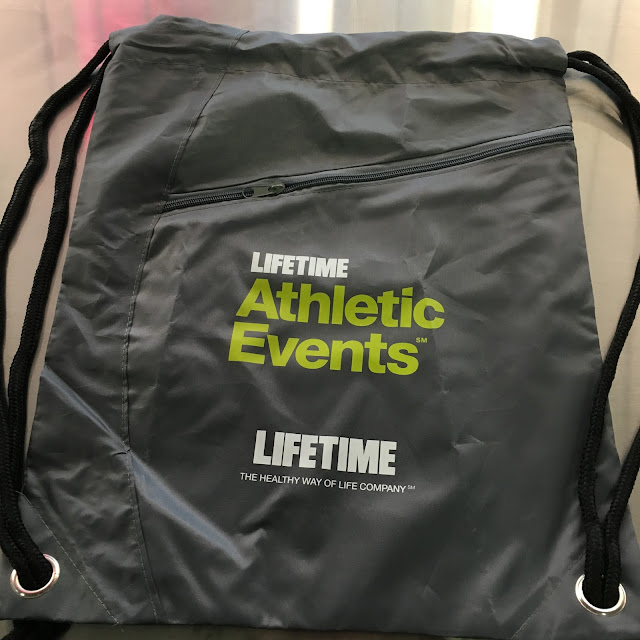 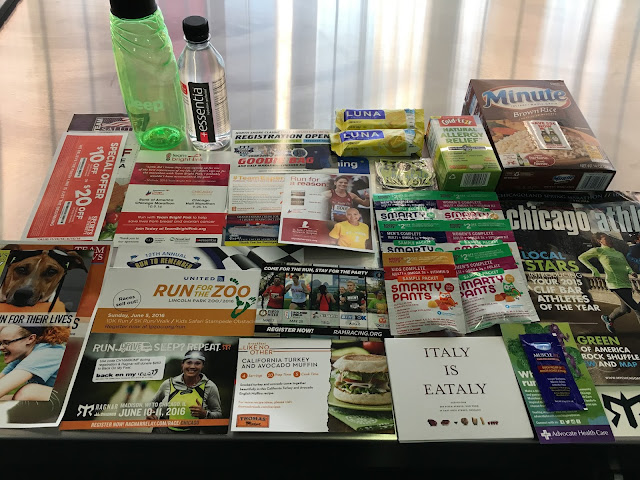 Thanks for the stuff and the info, expo! 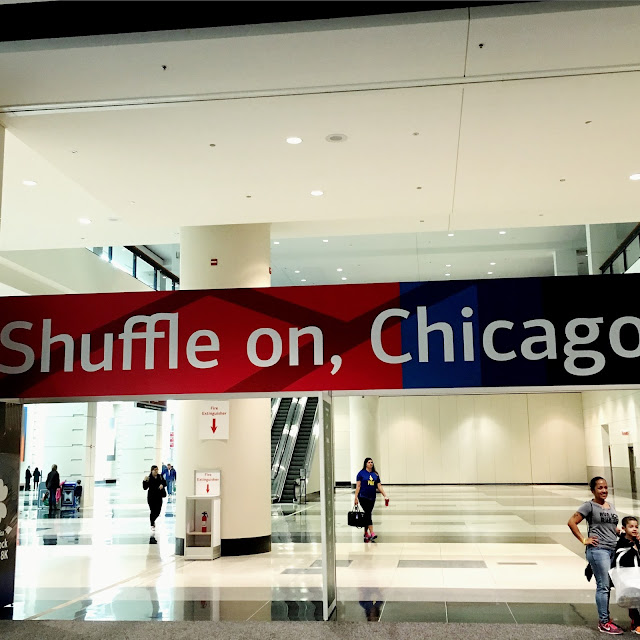 I'm actually starting to get a little excited for the race tomorrow morning. It isn't the full blown "I can't wait to run this race!' excitement that I was hoping for, but I'm no longer considering skipping it and sleeping in....So that is a win.

My goal for the race is extremely simple and is one that keep popping up time and time again: finish the race.

I wish I had something different. I feel like that has been my goal for a lot of recent races. But, in the long run, it is the best goal for me, right now. I just haven't been feeling great, lately. That combined with taking a bunch of time off lately means that there just aren't many attainable goals for this race.

Actually, let me amend my goal a bit.

My goal is to finish the race with a smile on my face. I won't have a new PR when I cross the finish line, but that doesn't mean that I can't enjoy my race day experience. 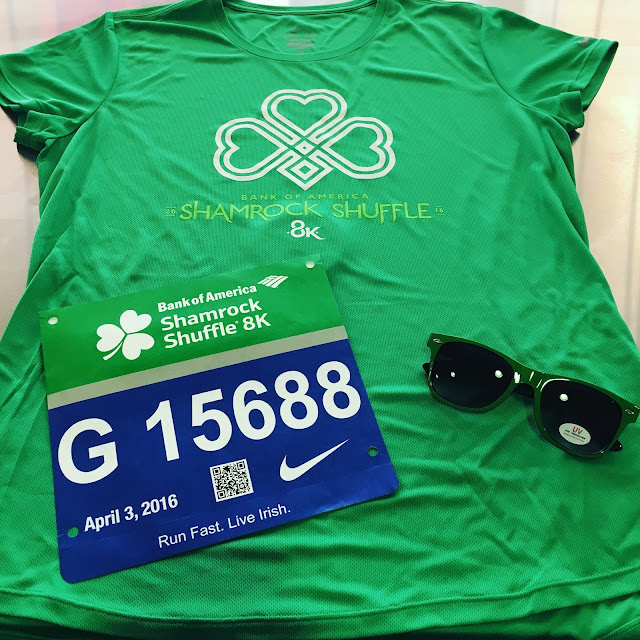