Time flies! I completely lost track of time and forgot to post my recap of the Rudolph Ramble 8k! As the year quickly draws to a close, I knew I needed to rectify this oversight, especially because I had a great time at the race.

I didn't get to run last year's Rudolph Ramble because I woke up incredibly sick the morning of the race, so I was determined to finally run it this year. I signed up online as soon as registration opened and began counting down the days. Like last year, participants would receive a winter cap, and there were two colors to choose from, red and blue.

As I've come to expect from Fleet Feet's races, everything was easy and well organized. Registration was simple and straight forward, there were multiple packet pick up opportunities, and there was plenty of communication leading up to the race with all the pertinent information needed for a good race day experience.

We'd been having some unseasonably warm weather for December, and the day of the race was no different. Instead of the usual wintery weather, we had warm temperatures and rain. Lots of rain. I packed my gear check bag and prepared for a wet and muddy race - choosing to wear an older pair of shoes and taking some dry clothes to change into after the race. Due to the warmer than usual weather, I decided at the last minute to wear shorts instead of tights or capris.


Luckily, the rain stopped around the time my train arrived, and it ended up waiting until after the race to start up again. As I walked from the train to the race site, I saw a lot of other runners out and about. There were plenty of people who dressed up for the race, and I saw a lot of Santa hats and reindeer antlers.

The race site and the course incredibly muddy and covered in water, but the race organizers and volunteers did what they could. Gear check had extra plastic bags to place everyone's gear check bag in to protect runners' personal belongings from the mud and water. Nothing could be done about the mud and water on the course, but I did see several folks working to clear any debris that the storm had blown onto the course during the night and early morning.

I found Rudolph right away, but he was pretty hard to miss.

I made a mental note of where the cider and donut tent was, because that would be my first stop after crossing the finish line (every runner got a free Do-Rite Donut and a cup of apple cider following the race). In addition to the usual sponsor and vendor tents, there was also a place to have your photo taken with Santa and the Big Shoulder's Coffee truck (coffee was free at the race - something I took advantage of after crossing the finish line).


When it was announced that it was almost time for the race to begin, everyone started making their way to the starting line. There were signs posted displaying various paces, and runners were asked to line up according to estimated pace. I made my way to the 10 minute pace sign, as I averaged about 10:14 per mile at my last 8k and was hoping to do something similar or slightly better.

I was pleasantly surprised to find several ladies that I see every week at Fleet Feet's Chick's Night. We chatted a bit before the race, wished each other good luck, and got ready to run through the giant mud puddles that were just beyond the start line.

The race started, and we began slowly trudging forward. The start of the race was even slower than usual, and not due to too many people over estimating their pace. No, on this morning, the hold up was all of the runners who tried to avoid stepping in puddles. I was also guilty, as I tried to slowly manuever around puddles and skip over them, but I quickly realized that the entire course was going to covered with these small lakes, so I just gave up trying to avoid them and ran straight through them.

Yes, I was quickly covered in mud, and my shoes and socks were soaked through, but it was much easier than trying to hop and jump around the water, and I didn't really have to weave in and out of other runners by just going down the middle of the path, as everyone else was sticking to the extreme sides in the hopes of avoiding water.

The first couple of miles felt great. I was right on pace, my breathing felt easy, and I quickly got over being muddy and wet. It was fun seeing the leaders on their way back. They were so fast!

I was running in shorts and a thin long sleeved shirt, and I wish that I had actually worn a short sleeved shirt, as I was too warm by mile three. I was shocked at the number of people racing in full winter running gear. I kept seeing runners in long tights, jackets, hats, gloves...the works! If I was hot in shorts, then they must have been boiling!

The last couple of miles weren't as easy as the first. My breathing became a bit labored and my calf cramped up, but I kept moving, even if it was a bit more slowly than I would have liked. Soon there was only a mile left, so I tried to pick up the pace a little.

I crossed the finish line with a new 8k PR! It was nice getting another PR at my last race of the year. This has been a pretty great year for me when it comes to running and setting new PRs. There was only one way to celebrate. With donuts!

Every runner got a Do-Rite Donut and a cup of cider. The cider was nothing to write home about, but that donut was delicious! I got a nice hot cup of coffee from the coffee truck, grabbed my gear check bag, and checked in with my Chick's Night friends to see how they had done. Everyone was had a great race and was in a festive mood, even if they were covered in mud.

I stuck around to cheer on more runners as they crossed the finish line and to cheer for those who won awards. It was getting close to the time I needed to leave, but I had one more thing I needed to do. To really celebrate my new PR, I had to have a photo with Santa!

I cleaned up as best as I could and changed into clean clothes and bid farewell to the Rudolph Ramble.

I really enjoy the 8k distance and always have fun at Fleet Feet's races. They know how to put on a great race, and I'm always impressed by how well organized and well run they are. Even with the unseasonably warm weather and the wet and muddy conditions, the Rudolph Ramble was a fun race, and I look forward to running it again in the future. 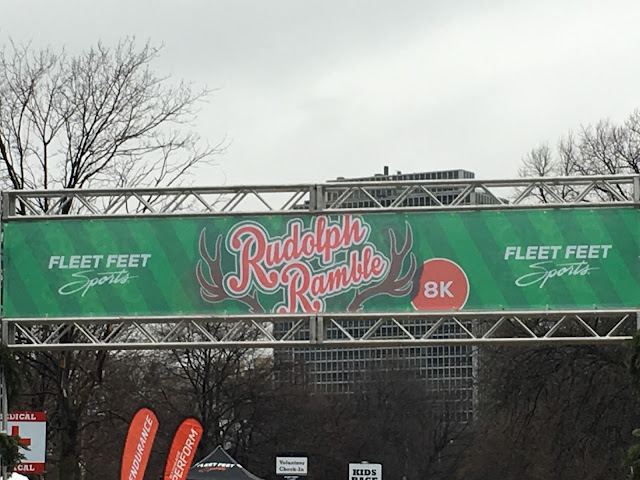 Posted by Rebecca at 9:00 PM No comments:

A Few Good Deals This Weekend

Here are a few of my favorite deals for this weekend:

Brooks is offering a different daily deal for a limited time through their website. Each day they choose one item that will be 35% off for that day only. This weekend (Saturday, December 12 and Sunday, December 13), they have 35% off all men's and women's bottoms.

If you like your sneakers to look a bit more retro, then head over to Saucony's website, where they are offering 30% off their Originals line this weekend using code ORIGINAL30.

Oiselle also has been rolling out some deals available through their website. is offering 25% off all of their Wazzie Wool styles using code WOOWOOL now through Tuesday, December 15.

Fleet Feet Chicago has some sales now through December 24 as part of their Fitnatic Celebration. A few of the highlights currently found in their various locations around the city (there are a bunch of other offers currently available, so check out Fleet Feet for the full scoop):

I'll let you know if I see any other good discounts this weekend. Remember that if you are planning to order Christmas gifts online, then most places require your order to be in by December 17 to guarantee delivery by Christmas.

Posted by Rebecca at 7:04 AM No comments:

Sleep, I Miss You

The past week has shown me the importance of getting a good night's sleep. I've had bouts of insomnia pretty much my whole life, and I've been hit hard by it recently, getting little to no sleep and then being exhausted all day.

The first couple of days weren't a terribly huge deal, but I really noticed a difference yesterday and today.

I'm having trouble focusing and am generally lethargic, and I've caught myself being more irritable and snapping at people, leading to apologies and feelings of guilt. Everything just seems really difficult, whether it is walking up the stairs to get to my computer at work or deciding what to eat for lunch.

I've also notice a big difference in my workouts. I find myself slowing down and struggling to complete workouts that usually give me no trouble. For example, I went to the gym for some strength training the other day and found myself having to use lighter weights than usual, and, even then, I had trouble completing my usual reps. Also, at last night's Chick's Night run, I just couldn't find my groove and had to run much slower than usual and really struggled during what is usually an easy five miles.

To make a long story short, sleep is important. Sleep has a big effect on your body and your mind. It can be the difference between a good day and a bad day. Right now I'm just waiting for sleep to return to me, and once it does, I will never take it for granted again.

Posted by Rebecca at 2:00 PM No comments: