Like many people, I woke up early on Thanksgiving morning in order to run. The question every Thanksgiving seems to be, "Which turkey trot are you running and how far is it?"

Turkey trots will always have a special place in my heart, as my very first race was a turkey trot. This year, I was determined to not just run a turkey trot, but to settle a personal vendetta. Last year's Thanksgiving race, the 2014 Turkey Day 5k, didn't go so well for me and was a pretty big disappointment. To keep it brief, I was hoping to PR and had specifically trained to do so, but I actually ended up running my worst time ever for a 5k and struggling to even finish.

So this year it was easy to decide on which turkey trot to run. I would once again run the Turkey Day Run and redeem myself after last year's problems, but this time, I would tackle the 8k.

I woke up on Thursday feeling pretty terrible. I had been sick all week, and although I had felt much better on Wednesday, things had taken a turn for the worse overnight. I decided against my better judgement to go ahead and run, so, after getting dressed and eating breakfast, I took some cold medicine, added a handkerchief to my gear check bag, and set out.

It was a little chilly and wet from the rain the night before, but I was thankful that it was so much warmer than last year's race. Learning from my mistakes last year, I didn't show up quite so early this year. I was at the race site about 40 minutes before the race began, giving myself enough time to drop off my donation to the Greater Chicago Food Depository, stop at the bathroom, and then shed my outer layer of clothes and check my bag.

Everything, from packet pick up and gear check to games and giveaways, was easy to find, and there was plenty of things to see and do both before and after the race. I stopped by the Fleet Feet tent to say hello to a friend who was volunteering that morning, then I made my way from booth to booth to see what was being offered before heading over to the start corrals.

Yeah...I wasn't feeling all that great and kept coughing, so I was happy that a.) I had my inhaler with me and b.) I had already planned on running at an easy pace. I wasn't trying to PR. I just wanted to finish without the pain of last year.

I found the marker the start corrals and lined up appropriately between the 10 and 11 minute markers, planning to run at about 10:30 per mile. Even though I wasn't feeling great, I was excited to be at the race. There is just something about running and sharing the race day experience with thousands of other people that gets my blood flowing.

Unlike last year, the 8k and 5k both started together. As we got closer to the 9am start time, the corrals soon began to fill with more people than I was really prepared for, and it got pretty crowded pretty fast. There were a lot of families and groups of friends running together, which was nice to see.

The race started promptly at 9am, and we began slowly creeping forward to the starting line. Music was playing and people were chatting and seemed to be genuinely happy to be out on Thanksgiving morning. Runners were released in waves, so it took a good chunk of time before the starting line was really in sight.

At 9:26am, my wave was released and I started running. As usual, there was some weaving at the start, trying to get around folks who had not seeded themselves correctly, but thanks to the wave starts, the course soon opened up a bit and there was room to breathe.

It took until the first mile marker for me to find a comfortable pace, but once I found it, I was good to go. The course was simple and straightforward, heading north on Lake Shore Drive before cutting over to the Lake Front Path around Montrose and heading back south to the race site. Once the 5k and the 8k split, the course was much less crowded, though the two joined up again for the final mile.

I had found my groove and was chugging along. I was still coughing from time to time, but I actually felt a lot better once I was running. I don't know if it was just the power of running or, more likely, my cold medicine finally kicking in. Either way, it felt great to be outside and moving.

I did start to slow down a little bit during the final mile, but I was still feeling pretty good when I spotted the finish line. I didn't sprint across the finish the way I usually try to do, but when I stopped my watch and checked my time, I was pleased to see that I had actually managed an 8k PR.

I took one of everything that was handed to me at the finish - water, Gatorade, yogurt, and various other snacks. I quickly grabbed my bag from gear check, threw on my extra layers, and then made my way to the results tent. Sadly, they only had results for the top finishers. The rest of us would have to wait up to 48 hours for our chip times to be updated online. Not a big deal, as I knew my time based on my own watch and was happy with my overall effort. A few people weren't thrilled with not being able to immediately check their results, so I felt a little bad for the volunteers working the results area.

Next up, food and fun.

There were the usual mini Clif Bar samples, as well as some of Clif Bar's kids products. The My Fit Foods tent had samples of a pretty tasty pumpkin baked oatmeal, and there was also hot apple cider, which was both yummy and festive.

There were several games for the whole family to enjoy - bean bags, a football toss, and turkey bowling, where you actually throw a frozen turkey down a bowling lane. You could win tickets at each of the games that could then be redeemed for various prizes. 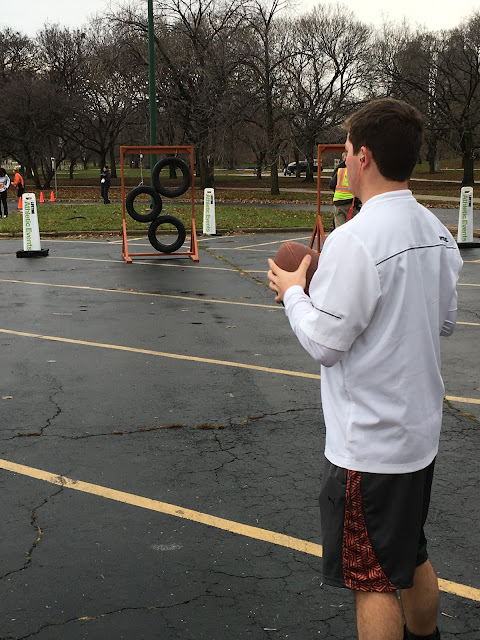 I stuck around long enough to cheer on some finishers, cheer for those who won awards, and have a second cup of cider, but once I started feeling ill again, I hit the road and made my way back to the train to head home.

As soon as I was home, I took a hot bath, drank some tea, threw on some pajamas, and then quickly fell asleep. I woke up several hours later to find Hannah sleeping on top of me, so clearly, I had to stay in bed a little longer.

I was happy I ran, but I honestly probably should have stayed home instead of going to the race, as I was feeling worse than ever. I abandoned my remaining Thanksgiving plans, choosing to stay in bed, relax, and hydrate.

Later in the evening, I fixed a quick and simple dinner for myself - a grilled cheese sandwich, roasted green beans, and a quick cranberry sauce. Hannah and I enjoyed the rest of the evening watching Netflix before turning in early. Run, sleep, kitty cuddles, food...overall, not a bad Thanksgiving.

Even though I was sick, this year's Turkey Day Run went much better than last year's. Running what felt like an easy pace, I managed a PR, with a finish time of 50:48 (my previous PR was at the PAWS 8k this summer, with a finish of 51:46), so it is nice to once again see that I have improved this year.

The Turkey Day Run is well done, with plenty of packet pick up opportunities (there was almost a week of pick up options available at Fleet Feet's Lincoln Square location as well as a few other places in the city, and then there was also race day pick up), a comfy long sleeved shirt, and an easy to follow and well marked course. There was plenty of fun for everyone to enjoy in the form of games available both pre and post race, as well as tasty snacks available at the finish line and at the post race party. The winners get Thanksgiving goodies in the form of pies and turkeys, which is fun and very appropriate.

There are so many turkey trots to choose from, so it is hard not to find a fun race to run. I really do prefer the turkey trots that are actually on Thanksgiving, as opposed to the weekend before or after, as it gives me something to do on what could otherwise be a lonely holiday for those of us unable to travel to see family.