What is the best way to get into the Halloween spirit? By running a Halloween themed 5k, of course!

I've done a lot of races this year, blowing my goal of 9 races for the year out of the water. Some races were run with a specific goal in mind, either distance or time. Others were run just for fun. The weekend before Halloween, I ran one of those "just for fun" races and had a blast.

The Pumpkins in the Park 5k was a lot fun and a great way to get ready for Halloween. The family friendly event took place in the afternoon, as opposed to the usual early morning or evening times that most races have. There was a kids' race (called the Spooky Sprint) at 2pm, and a 5k race starting at 4pm.

I picked up my packet a couple of days before the race at Fleet Feet's Lakeview location on Southport. As is usual with Fleet Feet races and packet pick ups, everything was quick and easy. I was in and out with my packet in about 5 minutes. I was given a friendly greeting as I entered the store, helped with my packet, asked if I had any questions, and then I was back out in the world. The packet consisted of my bib number, clear plastic gear check bag, race shirt, safety pins, and then there were some printed sheets of race information available, if desired.

There were two shirt designs to choose from when I registered - a vampire theme and a Jack-O-Lantern theme. I went with the Jack-O-Lantern shirt. The race is called Pumpkins in the Park, after all.

The afternoon of the race, I made my way over to Lincoln Park. I had some friends who had children participating in the "Spooky Sprint" kids race at 2pm, so I wanted to make sure that I got there in time to see them run.

I was worried about rain, as it had poured overnight and a good chunk of the morning. Luckily, the weather seemed to be clearing up as I left for the race, and the sun even came out as I walked to the race site. It was still windy and a bit chilly, though, so I wore a jacket and an extra pair of pants over the t-shirt and shorts I would be wearing for the race.

I arrived just in time! The kids' race was just starting. The kids ran based on age, with the youngest children going first. The distances for the kids were also by age, so the little guys didn't have too far to go. Distances ranged from 10 yards to a quarter mile, depending on age.

Most of the children were in costume, which made the race even more adorable.

The son of one of my friends ended up winning the race for his age group and was very proud of his accomplishment. Their family and I ended up hanging out together for much of the afternoon. The kids seemed to be having a good time, and we made the rounds of the race site as we waited for the 5k to start.

There was food for purchase from a couple of food trucks. Both trucks seemed pretty popular, and you could smell the donuts cooking from the donut truck no matter where you were. That combined with the smell of popcorn from a table in the middle of the site made everyone hungry. 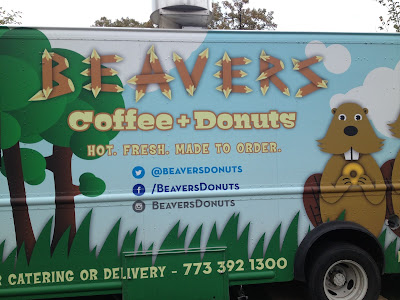 There were the usual tents around the area - race day packet pick up, gear check, tents for the various sponsors of the race, etc. Each tent at the race site had treats out so that the kids could go Trick or Treating from tent to tent.

Keeping with the family friendly nature of the event, there was also a tent with pumpkins and craft supplies, so each child could pick out a small pumpkin to decorate and take home with them, and in between the Spooky Sprint ending and the 5k starting, there was a children's costume parade featuring all of the kids who had come dressed up for the event.

There were just so many fun activities and treats!

As it got close to the 5k starting, it was still windy and chilly, so I waited until the last possible minute to take off my extra layers and check my bag. Gear check was well staffed and both drop off and pick up were incredibly quick and easy.

The usual pace per mile signs at the starting line so that people could line up accordingly were missing due to the wind, but there were several announcements made urging people to still line up according to anticipated pace, with fast folks at the front and walkers at the back.

After a couple of announcements, we were off! The first few minutes were the usually frustrating race experience of trying to find a hole to get around folks who had either overestimated how fast they were or just didn't care. After a little weaving, though, it was clear sailing. The course started by the South Field House and utilized the path between the zoo and the Rowing Lagoon.

Although an open course (generally the paths along the lakefront and in the parks remains open to the public even during the races), there was surprisingly little traffic on the path that was not associated with the race. I only saw a handful of runners, walkers, and cyclist who were caught by surprise as hundreds of people of costume ran by.

That's right, the kids weren't the only ones who came in costumes. The adults also got into the spirit of the season, and plenty of runners were sporting their best Halloween gear. I was dressed as Runner 5 from Zombies, Run! and was wearing my favorite Runner 5 shirt, wrist band, and other zombie apocalypse appropriate gear.

I was worried about running in short sleeves and shorts, as it was quite chilly and I was freezing at the starting line, but after the first mile I was quite comfortable and was glad that I hadn't worn more. I was making surprisingly good time and was feeling pretty good. I passed the first mile marker pretty quickly, and then the aide station, which was well staffed and stocked with friendly and enthusiastic volunteers handing out water and Gatorade. Before I knew it, there was only one mile left to go.

I started to slow down a little as I got a stitch in my side, but I was able to keep running. My favorite part of the course was that little bit at the very end where we went under the Grant statue and through the twisting path next to South Pond before coming back to the path and heading to the finish line.

I was ecstatic to see the final clock displaying a faster than usual time for me and was thrilled to hear my name announced as I crossed the finish line (this will never get old). I had a new 5k PR! My official finish time was 27:42, which was even better than the PR I had set just a couple of weeks earlier at another 5k.

I, as usual, grabbed one of everything handed to me at the finish - water, Gatorade, an apple, fruit snacks, a protein bar, etc. I met up with my friend who had finished before me, grabbed my stuff from gear check, and threw on my extra layers. As soon as I stopped running, I started shivering, so I was happy that gear check was so quick and efficient so that I could have my jacket and long pants to warm up again.

Every runner 21 or older got a free Goose Island beer, which was delicious. I enjoyed my beer while waiting by the finish line to cheer for the other runners, including my friends who were finishing after me. High fives were given, and we went to the stage to cheer as the various top awards were announced. After awards, there was the the adult costume contest. There were prizes for the best original costume, the best group costume, and the best Star Wars costume. To be eligible for the prizes, you had to run and finish the race in your costume.

After the costume contest came the real competition. Sure, you can run a 5k. But can you consume an entire pumpkin pie without using your hands in a limited amount of time? That's right, friends! It was time for the pie eating competition!

The brave contestants lined up in front of their pumpkin pies and waited for the start. Every one put in a valiant effort, eating as quickly as they could. The winners got a gift bag and a whole pie of their very own to take home with them.

I had a great time at Pumpkins in the Park and look forward to running it again next year. It was a fun race with great pre and post race festivities and was the perfect way to get into the Halloween spirit.

The afternoon time was a little strange but helped make it more accessible to families with small children. Although billed as a family friend event, even runners without children, such as myself, had plenty to keep us entertained.

I really can find no faults with this race. Fleet Feet knows how to put on a good race. There weren't many bells and whistles, but it was well organized and managed and just a lot of fun. Good shirt, good course, good communication, ample opportunity for packet pick up...yeah...I'm a fan. And I got a PR, which was just the icing on the cake.

I think it is safe to say that I'll be back again next year.
Posted by Rebecca at 1:30 PM